Good Morning Everyone!
Shh! Don’t tell anyone. From time to time I think that maybe I have a little too much "stuff". But, then I get over that thought quickly. I’ve been on a card making frenzy. I was thrilled to discover that I had the thin teal ribbon that I "needed". Later on I had the thin green ribbon that I "needed". And I found the tiny plastic cherries that I knew I had stuck into some container, but wasn’t sure which one it had been.
It’s too bad that work and chores interfere with my passion for card making. I have two workshops, one parent/child program, and one children’s class next week that need to be prepped. I still need to move more stuff from the living room to the basement. There are also things like cleaning, grocery shopping and laundry that need to be done.
But...I can’t haul things to the basement until Rob wakes up and helps me. He’s going to the grocery store with me too, so I can put that off for a few hours. Workshop prep...well, I actually have been prepping in my mind as I create my cards. I do have to create the activities, but those can wait for a while too. After all, there are pictures to take and a blog to write.
When I purchased the supplies that I used in today’s cards, I didn’t have any specific plans for those supplies. The plastic cherries were "too cute" to leave in the bin. The little stickers were included in a block of Martha Stewart paper which was on clearance for $5.99 so how could I leave that sitting on the shelf. MaryBeth gave me a package of paper and one sheet of it had the elephant on it. The little hat, purse, and tag set were on clearance for .49 and my only regret was that there was only one set!
I do not consider myself to be an impulse shopper. I just "know" what I like and I enjoy looking for things that call out "card potential" to me.
So...I had 3 small pieces of paper with cherries on 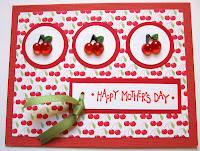 them that came from a DCWV small block called "Sweet" and I had some Mary Engelbreit rhinestone cherry accents that I picked up from the Dollar bin at Michaels months ago. Lately, I have seen cards with cherries on them in some of my magazines and I thought hmm, I have some cherries...
I used my circle Nestabilities to cut the white and red circles that have cherries on them. I love how easy it is to use Nestabilities and how nice they make things look. The Mother’s Day stamp is from the Lockhart Stamp Company.

This elephant card was so easy to make. Cut the paper, glue it on the card, add some text...done! 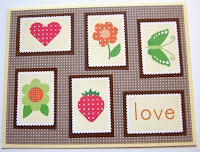 The "postage" stamps on this set of cards were in a 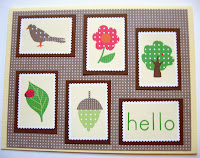 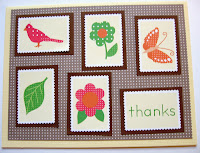 mounted the stamps on that tag so that they would "pop" off the card. Now that was easy. Cute too, don’t you think? 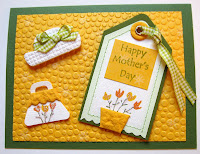 rd was much more work...NOT! Okay, I admit it, Peggy. When I stamped "Happy Mother’s Day" onto that store bought tag, I messed it up a little. So I stamped on some bright yellow paper, cut it out, and mounted it onto the tag. Looks good. No one can tell the difference. The tag, hat, and purse were a little set that came with a dress too which I will use on another card.
None of these cards took long to make. In fact it takes me longer to take pictures and write my blog than it does to make most of the cards that I create. But the combination of card making and blogging is so much fun that I just have to do it!
Okay...time for reality. Talk to you soon.
Carol

Posted by Carol Hartery at 9:36 AM

Love, Love, Love the cherry card!!
So simple, yet so creative.

I agree with you. I know what I like (trees, penguins...) and what I don't like (not crazy about the antique crafting papers and designs).

The yellow Mother's Day card has my favorite embossing on it. In fact, it made me get up out of my seat to see if I have it. I don't but I do have a Michael's coupon. I know where I will be going sometime this weekend.

Great cards Carol and I wouldn't have known you made a mistake if you hadn't said anything. Thanks for making things look (and really are) so easy. 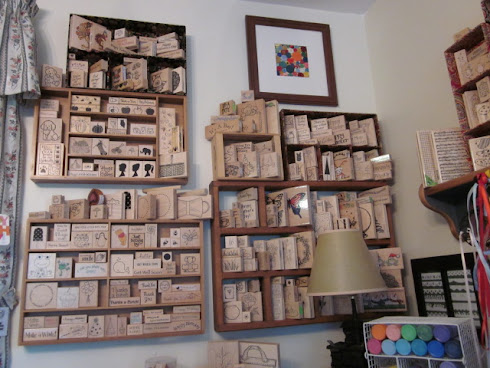